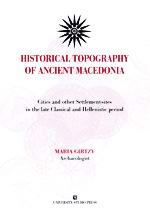 Historical Topography of Ancient Macedonia Cities and Other Settlement-Sites in the Late Classical and Hellenistic Period
$68.00 Añadir a la cesta
Maria Girtzy

The present study deals with the development of cities and other settlement-sites of Macedonia, during the late Classical and Hellenistic period. It takes into account the different districts incorporated into the Macedonian State (dividing them into three major areas i.e. the Lower Macedonia, the Upper Macedonia, and the Eastern districts), studying the mythology, the geographical location and the boundaries, the geophysical appearance and the natural resources, the ethnography, and the history of each district, along with the sites recorded in the ancient sources