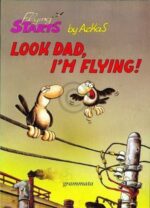 They fly low over terraces, antennas, chimneys.In polluted air, right next to the garbage.This is where mother sparrow left her son as soon as he was born. And since,sa the little one says himself,it never rains but it pours, he is stuck with his father, the only person in this world he can hate, annoy and humiliate – all of which he does with gusto day after day… (In any case, he hardly intends to be a sparrow for the rest of his life like his father, the loser!)The father, on the verge of a breakdown,tries his best to bring up his offspring in the turmoils of the big city, enjoying all the blessings of parenthood… The first volume of the famous Birds series by the greek cartoonist Arkas who with his trenchant humor has captivated generatios.